Traditional vs. Roth IRAs: Which Is Better? 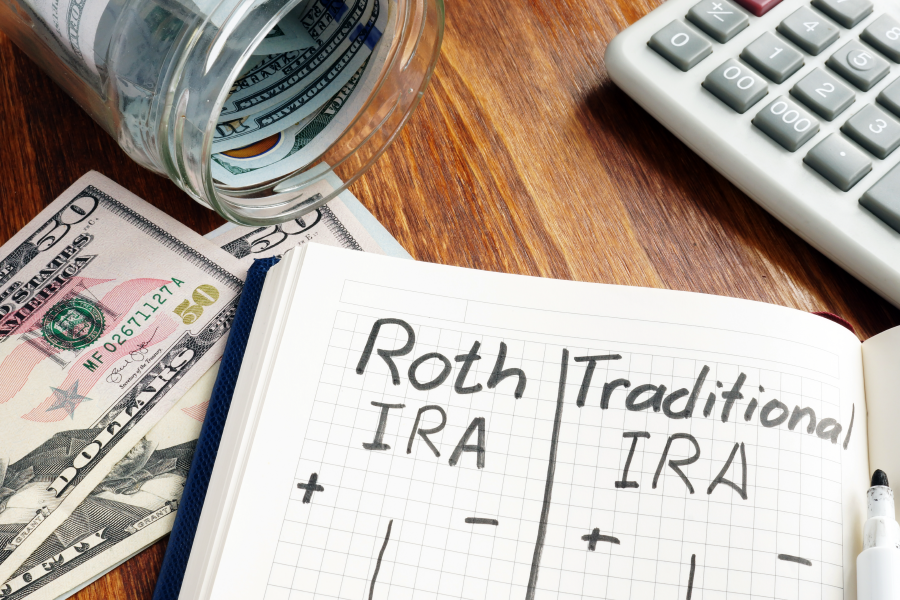 Want to open an IRA but aren’t sure which is better, a traditional vs. Roth IRA? We look at the differences between them, along with their role in diversifying your portfolio.

If you’re opening an individual retirement account (IRA) for the first time, you may be wondering which is better, a traditional vs. a Roth IRA?

The truth is each has its own benefits, and what’s right for you may not be right for someone else. There are also no rules about how many IRAs you can have, and some people have both for different reasons.

To help you choose, we’re looking at the differences of a Roth IRA vs. a traditional IRA.

Open to anyone earning an income, an individual retirement account (IRA) is a tax-savvy way to invest for your future, with the two most common being traditional and Roth IRAs.

Both provide special tax advantages to account holders provided you wait until at least six months after turning 59 to make a withdrawal. (As you’ll find out later in this post, there are additional rules for Roth IRAs.)

Typically, IRAs are managed by a custodian and offer limited investment options in the same way that many employer-provided 401(k) accounts offer just a handful of options limited based on your tolerance for risk and anticipated distribution date. However, what many people don’t know is that you can also use an IRA to invest in non-traditional assets.

With a traditional or Roth self-directed IRA, you can invest in a variety of private offerings and other alternative asset classes, including:

Because many of these assets are not strongly correlated with the stock market, a self-directed IRA is a terrific way to diversify your portfolio beyond the increasingly outdated 60/40 model of just stocks and bonds. And because you can’t withdraw from an IRA penalty-free at just any time, they make a good fit for alternative investments, which tend to take longer to mature.

Before jumping into a comparison of Roth vs. traditional IRAs, it’s helpful to understand IRA contribution limits.

As with other tax-advantaged retirement investments, IRAs are subject to contribution limits. Currently, traditional and Roth IRA account holders can contribute up to $6,000 per year, with an extra $1,000 “catch up” contribution allowed for people 50 and older.

There are, however, ways to fund a new Roth IRA account even if your income exceeds the IRS limits.

Other Ways to Fund Your IRA

IRAs can also be funded by rolling over another IRA or other retirement account, such as a 401(k) or 403(b) from a previous employer. Rollovers do not count toward the annual contribution limit.

When rolling funds between like accounts, you won’t pay a tax penalty as long as you follow the rules for doing so. Examples include rolling a traditional 401(k) into a traditional IRA or funds from one Roth IRA to a new Roth IRA.

However, it’s also possible to roll a traditional, tax-deferred retirement account into a tax-free Roth IRA by paying taxes on the transfer. (To learn more about this popular investment strategy, read our blog post on backdoor Roth IRAs.)

Now that we have a better idea of what IRAs can be invested in, how IRA contribution limits work, and other methods of funding an IRA, we can jump into the advantages each offers.

The Benefits of a Traditional IRA

IRAs were created by Congress in the 1970s to incentivize investing for retirement through tax-deferred contributions. At the time, fewer and fewer companies were offering pensions and the alarm was already being sounded that Social Security would run out—a concern that appears increasingly likely.

The idea was that by allowing individuals to make pre-tax contributions, they could afford to invest more upfront, giving their investments more time to grow. Instead, investors would pay income taxes upon taking distributions—when they might find themselves in a lower tax bracket (say, if no longer earning a salary).

Likewise, IRA holders were encouraged to give their investments time to generate returns by imposing penalties on withdrawals made prior to six months after turning 59. Keep in mind that traditional IRA account holders are not required to take distributions until turning 72.

To recap the advantages of a traditional IRA, these tax-deferred investment accounts can be a good choice for investors who:

The Benefits of a Roth IRA

By the 1990s, a lot of people still weren’t using IRAs to invest for the future. So Congress created the Roth IRA, which offers a potentially greater perk: completely tax-free gains and distributions for those who are eligible.

In fact, it was to prevent the ultra-wealthy from using Roth IRAs to shield their income from taxes that Congress imposed limits on who could contribute to a Roth IRA.

Roth IRAs have the same contribution limits as traditional IRAs, but contributions are made using after-tax money. As a result, withdrawals are completely tax-free as long as your account is at least five years old and you wait until six months after turning 59 to take your first distribution. Also, Roth IRA holders are not required to take RMDs.

Though contributions are not available to everyone, there are many benefits to a Roth IRA, making them great for people who:

Whether a Roth or traditional IRA is right for you, both offer considerable advantages over taxable investment accounts. For this reason, many investors have both traditional and Roth IRA accounts.

If you’re interested in using tax-advantaged retirement funds to invest in non-traditional assets, a self-directed IRA from Alto may be what you’re looking for.

Alto offers two different IRAs, both of which are available as traditional, Roth, or Simplified Employee Pension (SEP) IRAs:

Ready to start investing with a traditional or Roth self-directed IRA, open an Alto account today!